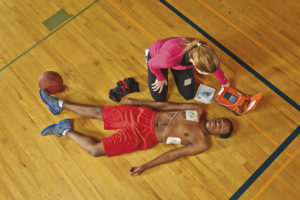 NCAA Basketball player, Hank Gathers, made national news in 1989 when he collapsed during a Loyola Marymount University home game against UC Santa Barbara. He was 23 years old when he died from sudden cardiac arrest.

Although he was previously diagnosed with an arrhythmia and prescribed medicine for it, they found that he actually had hypertrophic cardiomyopathy once the autopsy had been performed. Gathers’ shocking and untimely death brought more awareness to sudden cardiac arrest. Unfortunately, we are still hearing about too many young athletes dying due to SCA.

More than 350,000 deaths occur as a result of sudden cardiac arrest each year. SCA is the leading cause of death in young athletes. In the United States, one young athlete will die suddenly every three days.1 More than two-thirds of these children and adolescents are basketball and football players (67%).2 These tragic deaths often occur when the heart is under stress, such as the heart-pounding sport of basketball. It is also important to remember that SCA can happen at any age. The average age when it occurs in young athletes is 17.5 years.5 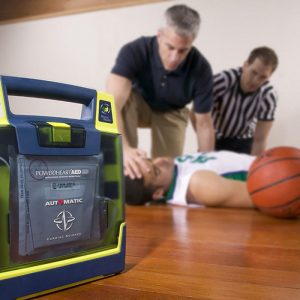 Sudden cardiac arrest is completely different from heart attacks. It is a problem involving the electrical components of the heart, whereas a heart attack involves the plumbing components. Underlying heart conditions can suddenly cause ventricular fibrillation, otherwise known as V-Fib.

The lower chambers of the heart quiver rather than pump normally. This creates interruptions in the blood flow to the heart and the body’s most vital organs. If you can reach a victim and initiate CPR immediately after they go unconscious, their chance of survival goes up drastically. If you have an AED on hand, survival rates are even greater.

Kaeyel Moore, age 16, from Reagan High School in San Antonio, TX, was struck by SCA on the courts last January. He collapsed and was saved by the use of an Automatic External Defibrillator.

Ty Solomon, a basketball player for the South Carolina State Bulldogs, collapsed from SCA in December of 2017 in a game against North Carolina State. Solomon is  a survivor thanks to CPR and a life-saving shock from an AED.

16 year old, Clayton Perndergrass was saved with CPR and an AED by his trainer, an off-duty nurse, and a fire chief that was on his way home during one of his high school basketball games last November. His coach said “He had never had an issue. He played football and basketball for us last year. His whole family is extremely athletic. He’s a healthy 16-year-old kid, a fine young man.”

Mike Nolan is another young survivor of SCA that occurred February during a pick-up basketball game at his church gym. He was saved by the efforts of the other basketball players that started CPR and ran to retrieve the AED in the church. 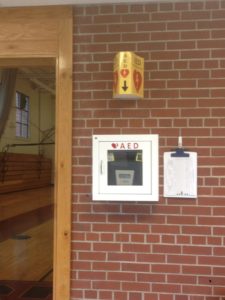 Though SCA is practically undetectable until a cardiac event occurs, there are certain risks to be aware of. These include:

In addition to risks, specific preventative measures can be taken to avoid SCA. If you think that your child may be at risk talk to your general practitioner and alert the athlete’s coach. Tests like an Electrocardiogram, or ECG, can be used to identify an underlying condition and lower your child’s risks. ECG’s measure electrical activity in the heart and can potentially detect many heart conditions. ECG’s can detect heart conditions that cause up to 60% of sudden deaths in young, competitive athletes.2

Another test that can be administered to athletes is an echo test, also known as an echocardiogram. This is an ultrasound of the heart. The ultrasound takes moving pictures of the heart so that the doctor can more accurately understand the current state of the athlete’s heart.

If you think your child may be at risk, do not put off seeking help. In a long-term study, screening athletes with cardiac testing reduced the number of sudden cardiac deaths by 89%.3. This could potentially save your athlete’s life. 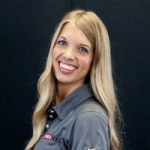