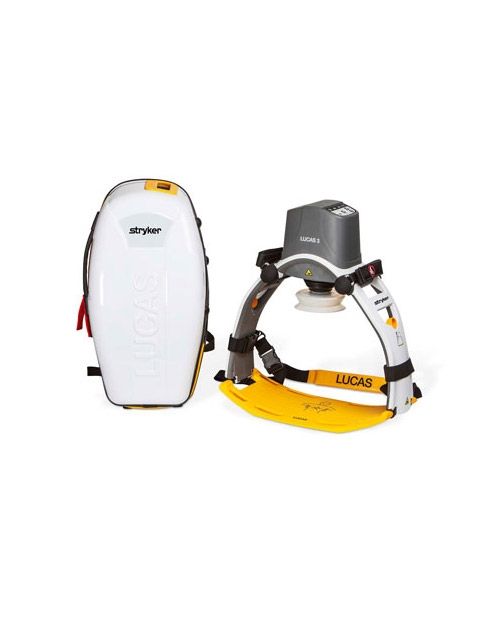 While there are many mechanical CPR devices on the market today, there can ONLY be one “first”: LUCAS.

The LUCAS CPR device improves the delivery of CPR therapy, according to programmable guidelines (changing every few years), by providing high-quality chest compressions for long periods of time in difficult situations. Allowing this essential piece of life-saving therapy allows rescuers to focus on other necessary steps during an emergency.

There are more than 24,000 LUCAS devices in use today; more than any competitive device. With more than 15 years of experience in automated resuscitation and over 200 studies published, you can rely on LUCAS’ to perform all the way from the site of the emergency to the hospital.

Safe and Effective- Being labor intensive and physically difficult, CPR is one of the most chaotic functions of a rescue. The human variable can lead to ineffective CPR, reduced survival rates and compromises to the safety of both the rescuer and the patient. Automated CPR can free up focus needed for other steps in the rescue.

Consistency Saves- The LUCAS automated CPR allows consistent rate and depth of compression, while reducing dangerous interruptions to compressions. Also, the quality of the compressions needed to sustain blood flow is not compromised due to the natural fatigue for emergency personnel. There have been several published accounts of multi-hour (wow!) rescues resulting in the successful resuscitation of patients.

Minimum Interruptions- Humans tire and need to frequent rests to maintain good CPR compressions. Transfers from scene to ambulance to stretcher to bed all require interruptions in CPR. Having a fixed, consistent device providing constant compressions is ideal.

Reduction of Stress- Treating a victim that requires CPR is stressful enough. Any simplification to the entire ordeal is welcome. Using the LUCAS, responders can focus on other aspects of treatment and not have to constantly wonder who will be relieving them. Removing compressions from the list of things to worry about allows rescuers to deal with the condition causing distress.

Fewer Hands Required- If you are short staffed, treating a patient in distress can be even more challenging. Having your teammate, LUCAS, there doing “his” job allows you to focus on other aspects of the rescue.

CPR Coach- In addition to the constant, effective chest compressions, LUCAS also instructs the user when to ventilate. LUCAS also gives you the ability to review performance with post-event reports you can use to coach your team on how to improve.

Safer Transport- Standing over a victim while trying to perform CPR in a moving vehicle feels like executing the Triple Lindy. The LUCAS reduces the need to be in awkward positions required to deliver CPR while bouncing around.

Fewer Injuries to Your Most Valuable Asset…Your People- A big problem for EMS and Fire personnel is on-the-job injuries. A lot of these injuries involve pickup up, moving and treating patients. Can you imagine trying to carry a patient down several flights of stairs while someone makes your job that much more difficult by performing CPR on the victim being moved? Very few of us are gymnasts, and our bodies do have limitations. Allowing LUCAS to provide constant, effective chest compressions allows you to get the patient to treatment sooner, with few injuries to responders.

Fast-Reliable-Safe- LUCAS’ easy 3-step user interface makes applying the LUCAS simple and quick: only a 7 second interruption while switching from manual CPR to the LUCAS. With almost 100% in clinical reliability tests, count on your Team Member, LUCAS, to hold up “his” end of the job.

Wireless Configuration- Set your LUCAS to perform according to your protocols using the LIFENET system. You can set your protocol in the following ranges:

Rate- 102, 111, 120 plus or minus 2 compressions per minute (fixed or variable during operation)
Depth- 1.8 to 2.1 inches plus or minus .1 inches
CPR Timer- Between 1 and 15 minutes
Ventilation- Alerts the user when to ventilate according to pause length and count
Piston Position- Autofit or Quickfit
Piston Release- Allows piston release during ventilation

Coaching- Review events after the emergency has passed

Once the device is connected to wifi, a PDF report of the event summary is emailed
LUCAS allows you to predetermine several email addresses that can directly receive reports
Able to be integrated with Code-Stat 11

Unique Design- The LUCAS is a piston-driven device that has a suction cup at the bottom of the piston that guides delivery and follows the chest. The LUCAS is compact, lightweight and easy to transport.

The 1990s- Besides being the undisputed, greatest decade for music, the idea of mechanical CPR (Cardio Pulmonary Resuscitation) was born during the 90s. A paramedic in Norway named Willy Vistung saw CPR being performed on a patient being transported while on a stretcher. As you can imagine, the result of these efforts being made on a moving patient with multiple people around could be inconsistent. Willy sought out a Lund University professor in Sweden to float the idea of an automated device to perform chest compressions. The idea centered around the goal of reducing the inconsistency of results in real-world, stressful situations that are, to be kind, chaotic. CPR is one part of a rescue, and no two rescues are the same. By the end of the decade, work had begun on what would become the LUCAS.

The process began by studying the physical effect of sudden cardiac arrest (SCA) on the human body and the importance of effective chest compressions during a rescue. The studies showed the necessity of good compressions if a favorable rescue was to be achieved. Because of a pigs similarity to human physiology, these creatures are enlisted in the noble research into how to save more human lives. The studies performed on these pigs showed that the LUCAS technology could greatly improve coronary pressures and cerebral circulation compared to manual chest compressions.

Early 2000s- Enter the engineers to make the promise of this new technological theory into a reality. The trick was to create a robust device that could withstand the rigors of rescuing people while being mobile and easy to use during a chaotic situation.

2003 featured the first generation LUCAS device to be used by paramedics in Sweden. The technology was welcomed, as it eliminated a physically-demanding part of the rescue, allowing medical personnel to perform other responsibilities, like dressing wounds and delivering medication…all while keeping balance in the back of a speeding ambulance. By 2009, the second generation LUCAS 2 was launched to the entire world.

Most Recently- As more and more first responders and hospitals worldwide begin to use the device, the third, and most recent, generation LUCAS 3 was launched in 2016. There are other versions of mechanical CPR being made by competitors, but the LUCAS product started it all and has the longest history. There have been over two hundred studies published regarding the delivery of LUCAS’ mechanical CPR in multiple settings. The results showed that LUCAS has saved lives that may have otherwise not been forsaken. Endurance, consistency, confidence…LUCAS.

What Does LUCAS Mean?

LUCAS’ creators wanted to give the device a human name, making it seem like a member of the team working to save someone’s life. LUCAS was chosen as an acronym for Lund University Cardiac Assist System. Pretty clever.

What Comes With the LUCAS?